PUT A STOP AND END TO IT NOW

To put a stop to something is an idiomatic word which means to terminate or abolish something. It is synonyms with: put an end to; put paid to and put the kibosh on.

In 2Cor 11, Paul outlined many of the troubles he faced in the course of the gospel.

2Cor 11:24-25 KJV 24 Of the Jews five times received I forty stripes save one. 25 Thrice was I beaten with rods, once was I stoned, thrice I suffered shipwreck, a night and a day I have been in the deep;

He at another time reminded his son in the Lord Timothy of the same.

2Ti 3:11 KJV Persecutions, afflictions, which came unto me at Antioch, at Iconium, at Lystra; what persecutions I endured: but out of them all the Lord delivered me.

What did Paul do about all these problems? Did he pray about them or just allow things to follow their course?

2Cor 12:7-10 KJV 7 And lest I should be exalted above measure through the abundance of the revelations, there was given to me a thorn in the flesh, the messenger of Satan to buffet me, lest I should be exalted above measure. 8 For this thing I besought the Lord thrice, that it might depart from me. 9 And he said unto me, My grace is sufficient for thee: for my strength is made perfect in weakness. Most gladly therefore will I rather glory in my infirmities, that the power of Christ may rest upon me. 10 Therefore I take pleasure in infirmities, in reproaches, in necessities, in persecutions, in distresses for Christ’s sake: for when I am weak, then am I strong.

Paul said in order that he should be exalted above measure, a messenger of Satan was given unto him. This passage of the scripture has been of concern to many. Some people say that Paul had a problem of pride and in order to keep him in check, God put sickness on him. Nothing can be further than truth. Paul had no issues with pride. “to be exalted above measure” is simply talking about the revelations that Paul had of the gospel message which he was propagating everywhere. What he was saying is that in order to prevent him from spreading the gospel message everywhere, a thorn which he defined as messenger of Satan was given to buffet him.

It is to be noted that God does not put sickness on people. If he does, how come Act 10: 38 says that Jesus was anointed by God and he went everywhere healing all that were sick and afflicted of the devil. They were not afflicted by God. If they were afflicted by God, then Jesus will be undoing what His Father had done and you know that is not correct. So this has nothing to do with God.

So, what is the thorn and the messenger of Satan? Some scholars say it is an eye problem Paul was talking about in his letter to the Galatian church where he said how big the letters were. It is not an eye problem or any physical ailment for that matter. So, what is it? We will go trace our steps back into the Old Testament to see what Bible was talking about thorns:

Num 33:55 KJV But if ye will not drive out the inhabitants of the land from before you; then it shall come to pass, that those which ye let remain of them shall be pricks in your eyes, and thorns in your sides, and shall vex you in the land wherein ye dwell.

Jos 23:13 KJV Know for a certainty that the LORD your God will no more drive out any of these nations from before you; but they shall be snares and traps unto you, and scourges in your sides, and thorns in your eyes, until ye perish from off this good land which the LORD your God hath given you.

Jdg 2:3 KJV Wherefore I also said, I will not drive them out from before you; but they shall be as thorns in your sides, and their gods shall be a snare unto you.

From the above references of the scriptures, we found out that thorns refers to people, nation and in general men. So, we can confidently says the thorns that Paul was referring to were men especially unbelieving Jews and gentiles. The Greek word used for “messenger” is “agellos” and it means a messenger, envoy, one who is sent, and an angel. The devil stirred opposition against Paul using the unbelieving Jews as agents. This is exactly what happened to Paul from the time he commenced his ministry. The Jews will not let him rest and everywhere he went, they raised opposition, instigated troubles, and made people’s minds evil against him. Let see some of those places again:

The Jews in Damascus

Act 9:22-23 KJV 22 But Saul increased the more in strength, and confounded the Jews which dwelt at Damascus, proving that this is very Christ. 23 And after that many days were fulfilled, the Jews took counsel to kill him:

Act 9:29 KJV And he spake boldly in the name of the Lord Jesus, and disputed against the Grecians: but they went about to slay him.

The Jews in Antioch

Act 13:50 KJV But the Jews stirred up the devout and honourable women, and the chief men of the city, and raised persecution against Paul and Barnabas, and expelled them out of their coasts.

The Jews in Iconium

Act 14:2 KJV But the unbelieving Jews stirred up the Gentiles, and made their minds evil affected against the brethren.

Act 14:5-6 KJV 5 And when there was an assault made both of the Gentiles, and also of the Jews with their rulers, to use them despitefully, and to stone them, 6 They were ware of it, and fled unto Lystra and Derbe, cities of Lycaonia, and unto the region that lieth round about:

The Jews at Lystra

Act 14:19 KJV And there came thither certain Jews from Antioch and Iconium, who persuaded the people, and, having stoned Paul, drew him out of the city, supposing he had been dead.

Paul was stoned to death here and miraculously he was revived. He went back to the city before moving out the following day to the next close by city called Derbe. What happened at Derbe? Let us read. 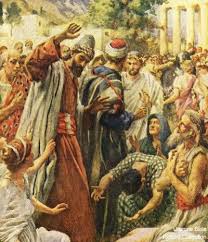 Act 14:20-21 KJV 20 Howbeit, as the disciples stood round about him, he rose up, and came into the city: and the next day he departed with Barnabas to Derbe. 21 And when they had preached the gospel to that city, and had taught many, they returned again to Lystra, and to Iconium, and Antioch,

The missionary outreach at Derbe was successful. There was no trouble or persecution. How come the Jews did not come down to Derbe to ferment trouble as they used to do? What happened suddenly? What causes the break in the pattern? We will remember that when Paul was talking to Timothy about the persecutions he faced, he enumerated the three cities of Antioch, Iconium and Lystra. He did not mention Derbe.

2Ti 3:11 KJV Persecutions, afflictions, which came unto me at Antioch, at Iconium, at Lystra; what persecutions I endured: but out of them all the Lord delivered me.

The question still remains why the sudden stop in hostilities at Derbe? I believe Paul in 2Cor 12 said he besought the Lord three times because of these “thorns” that were following him up and down making preaching the revelation to be difficult. The Lord’s response was that His grace is sufficient for him.

2Cor 12:8-9 KJV 8 For this thing I besought the Lord thrice, that it might depart from me. 9 And he said unto me, My grace is sufficient for thee: for my strength is made perfect in weakness. Most gladly therefore will I rather glory in my infirmities, that the power of Christ may rest upon me.

We have often defined grace as an unmerited, undeserved, unqualified act of God towards mankind. Sometimes it is defined as an unmerited favour of god. They are all correct but grace multifaceted. Grace is Jesus personified. Grace is the ability of God. What God was saying in essence to Paul was that His ability has already been made available and you can deal with this issue by yourself. Some people think that God was telling Paul to bear the persecution with the grace of God. Nope, The Lord was telling him to use His ability that has been provided rather than besought God to do something. This is what most Christians do today by asking God to do what he asked them to do. James 4: 7 says resist the devil and he will flee from you. I believe that after besought the Lord three times and he got the same answer, he decided to act when he got to Derbe.

Another thing is that human beings will not act unless they see strong things. At Lystra, they stoned Paul to death. It is most probable that he decided to act lest he may be killed. In Act 16 something of significance happens that shows that Paul sometimes delays acting.

Act 16:16-19 KJV 16 And it came to pass, as we went to prayer, a certain damsel possessed with a spirit of divination met us, which brought her masters much gain by soothsaying: 17 The same followed Paul and us, and cried, saying, These men are the servants of the most high God, which shew unto us the way of salvation. 18 And this did she many days. But Paul, being grieved, turned and said to the spirit, I command thee in the name of Jesus Christ to come out of her. And he came out the same hour. 19 And when her masters saw that the hope of their gains was gone, they caught Paul and Silas, and drew them into the marketplace unto the rulers,

Why did Paul allow the girl to follow them for many days before acting? When it was becoming a public embarrassment, he acted. I believe Paul utilized the ability of God and put a stop to the “thorns.” They were not able to come down to Derbe and he had great success there. From that point, the Jewish pattern of following him up and down seems to stem down as there were no records of such things happening in that same manner.

You too can utilize the grace of god and put a stop to the evil around you. Stop the evil patterns in your family; untimely death, marital failure, business failure, generation poverty, etc. You are born again and the Holy Spirit dwells in you. Therefore, the ability of God is in you. It is at your disposal and take advantage of it.