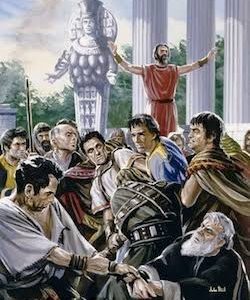 CONTEND FOR YOUR PROSPERITY AND ADVANCEMENT

What is happening to your job, career, business, hand-work and office? How are you faring? Is everything going on the way you plan it at the beginning of th year? Are you getting more profits as expected? If the answers to the questions i raised above are not good for you, may be you need to contend for your life and career.

Act 19:23-29 KJV 23 And the same time there arose no small stir about that way. 24 For a certain man named Demetrius, a silversmith, which made silver shrines for Diana, brought no small gain unto the craftsmen; 25 Whom he called together with the workmen of like occupation, and said, Sirs, ye know that by this ucraft we have our wealth. 26 Moreover ye see and hear, that not alone at Ephesus, but almost throughout all Asia, this Paul hath persuaded and turned away much people, saying that they be no gods, which are made with hands: 27 So that not only this our craft is in danger to be set at nought; but also that the temple of the great goddess Diana should be despised, and her magnificence should be destroyed, whom all Asia and the world worshippeth. 28 And when they heard these sayings, they were full of wrath, and cried out, saying, Great is Diana of the Ephesians. 29 And the whole city was filled with confusion: and having caught Gaius and Aristarchus, men of Macedonia, Paul’s companions in travel, they rushed with one accord into the theatre.

Paul was in Ephesus and great things were taking place. But there was a problem.

It is generally known that the temple of Diana at Ephesus was deemed one of the seven wonders of the world, and was a most superb building. It appears that the silver shrines mentioned here were small portable representations of this temple, which were bought by strangers as matters of curiosity, and probably of devotion.

A silversmith – The word used here denotes “one who works in silver” in any way, either in making money, in stamping silver, or in forming utensils from it. It is probable that the employment of this man was confined to the business here specified, that of making shrines, as his complaint Acts . Act 19:26-27 implied that destroying this would be sufficient to throw them out of all employment.

He gathered all fellow smith workers and began to incite them that Paul had been preaching that the worshiping of Diana is not proper.

It was a most lucrative trade; and he plainly saw that, if the apostles were permitted to go on thus preaching, the worship of Diana itself would be destroyed; and, consequently, all the gain that he and his fellows derived from it would be brought to nought.

Demetrius accused Paul of speaking to the people who were potential customers of the silversmith.

And so when they heard that, all of them became very angry and there was a great riot in Ephesus that day.

The design of this clamor was doubtless to produce a persecution against Paul, and thus to secure a continuance of their employment. Often, when people have no arguments, they raise a clamor; when their employment is in danger of being ruined, they are filled with rage.

Bringing it home, assuming you are Demetrius and one devil called “Paul” was speaking against your business and source of your wealth and income, what will you do?

Will you fold your hands and say well whatever will happen, let it happen?

If you don’t have plan B, i think you will react like Demetrius and his fellow workers.

Let me give you another instance where people defended their source of income when it was threatened.

Paul had driven a spirit of divination from a girl that had been following his team for days. Rather than the owners of the girl rejoicing and celebrating what God had done; they were very angry. They arrested Paul.

Act 16:19-21 KJV 19 And when her masters saw that the hope of their gains was gone, they caught Paul and Silas, and drew them into the marketplace unto the rulers, 20 And brought them to the magistrates, saying, These men, being Jews, do exceedingly trouble our city, 21 And teach customs, which are not lawful for us to receive, neither to observe, being Romans.

If you read the account very well, the real reason behind the aggression of the owners of the slave girl was not because of religion matter or that Paul was trying to introduce another religion different from what they were used to. It was primarily because they discovered that the source of their income, or what the Bible calls the hope of their gain was gone.

When Paul cast out the devil in the girl, she lost the ability to predict and therefore the source of income left too. The owners were furious and grabbed Paul and Silas before the magistrates.

The desire of the owners was to punish Paul for interfering in their affairs whereas the desire of theSilversmith people was to get Paul out of town so that they could continue to flourish in the business of selling Diana models.

The point I am stretching is that these people did all in their powers to defend their business. Even though what they were doing was wrong, we can learn from their attitude.

How do you know that some power is already acting against your products, sales, business and markets?

– When sales is stagnated

– When your customers are diverted

– When income is reduced and profit is down totally.

– When there is lack of promotion

– When there are no helpers

How does God bless His people?

Most people think that God will supernaturally rain manna from heaven and they will see money. That is only on yahoo.

Some think that somebody somewhere will just send them $100000.

All these could happen but the major way God blesses people is not through that method or magic.

Deu 28:8 KJV The LORD shall command the blessing upon thee in thy storehouses, and in all that thou settest thine hand unto; and he shall bless thee in the land which the LORD thy God giveth thee.

Deu 28:12 KJV The LORD shall open unto thee his good treasure, the heaven to give the rain unto thy land in his season, and to bless all the work of thine hand: and thou shalt lend unto many nations, and thou shalt not borrow.

Eph 4:28 KJV Let him that stole steal no more: but rather let him labour, working with his hands the thing which is good, that he may have to give to him that needeth.

1Th 4:11 KJV And that ye study to be quiet, and to do your own business, and to work with your own hands, as we commanded you;

Act 20:34 KJV Yea, ye yourselves know, that these hands have ministered unto my necessities, and to them that were with me.

So the primary means by which God blesses people is through the work of their hands.

So also the primary area of attack of the enemy is the hand of the people. If he is to attack people economically and financially, he attacked the work of their hands.

Because our hands are an instrument of our economic empowerment.

Everywhere the Lord Jesus shed His blood is for our redemption. So by shedding His blood from His hand, he has redeemed us from curses against our finances. Now we have legal grounds to stand against powers like “Paul” that want to destroy our economy.

Mal 3:10 KJV Bring ye all the tithes into the storehouse, that there may be meat in mine house, and prove me now herewith, saith the LORD of hosts, if I will not open you the windows of heaven, and pour you out a blessing, that there shall not be room enough to receive it.

I used the example of Demetrius to show the kind of attitude Christian should have towards their business and everything that concerns them. I am not saying what Demetrius and colleagues were doing was right and what Paul was preaching was wrong, but it is an analogy which if we turn the characters and the situations around, we can use them to our advantage.

Take for instance you sell a product that many people are buying and suddenly someone comes from nowhere and starts talking negatively about  your product and tells people that there is a better product than your. he says so many bad things and spoils your goods. What are you going to do? Are you going to fold your hands? If you do, you will soon run out of business and fold up. That was what Demetrius was fighting against. Can you use their attitude and come against that power that wants to destroy your business and impoverish you?

Rise up and not only defend your business but launch an offense against power that has been assigned to hinder you.

Isa 65:23 KJV They shall not labor in vain, nor bring forth trouble; for they are the seed of the blessed of the LORD, and their offspring with them.

Every yoke of labouring in vail be destroyed in Jesus name.

Every power introducing poverty, lack and insufficience into my life be destroy in jesus name

I call out every customer, money, blessings that has been given unto me. Come from the east, west, north and south

Let every door of opportunity for my trade, products and business be opened now in Jesus’ name.

The keys to my open doors I receive in Jesus name. Every power shutting doors of opportunity die by fire in jesus name

I command all gates of business success to be opened in Jesus’ name.

Lift up your heads every gate that has been shut against my prosperity. Be lifted by fire in Jesus name.